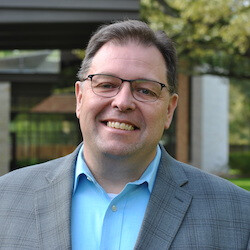 David Duncan and his family moved to Houston in 2006, where he accepted the role of Pulpit Minister at Memorial. He previously lived in Oklahoma while serving as the Outreach Minister at the Edmond Church of Christ from 1999-2006, and as an adjunct instructor at Oklahoma Christian University. David and his wife, Barbara, met while students at Oklahoma Christian. During their engagement, Barbara was located in Mito, Japan where she taught English as a vocational missionary. At the conclusion of her assignment, she was joined by David and the two were married in Japan!

After David completed a Master’s degree at Oklahoma Christian, he and Barbara moved to Vitoria, Brazil as part of a four-family mission team to plant a church there. Their family grew when two daughters, Anna Beth and Emma, were born while they were serving on that mission field. David completed a doctorate in Ministry at Houston Graduate School of Theology in 2010.

He loves to watch pro baseball and college football, and feels very blessed to have a wife and two daughters who love to cook!